The tour that our entire family was doing today is Ponagar Cham Tower, Long Son Pagoda and Embroidery. This is a half day tour. This is the first port where all seven of us are touring together. We are very excited.

Since we had an early morning tour, everyone was up at the same time, 5:30 am. We ate breakfast around 6:00 am and then meet our tour group at 6:45 am. Today was our first tendering port. The trip to the main land was about 10 minutes.

Nha Trang is a popular resort city in southern Vietnam. There are about 300,000 people living in this energetic city. As brief summary of Nha Trang, as described by Princess Cruises “was the capital of the Champa Kingdom, which dominated this corner of southeast Asia for 13 centuries.

Lilly pads are all over the countryside, this is a form of income for the Vietnamese. This lilly pad is at the cultural center.

Nha Trang tourist districts consist of a scattering of colonist era beachfront hotels and sidewalk cafes. This city was a popular spot for US serviceman during the Vietnam War.” Some additional information about Vietnam, provided by the tour guide is the following.

30%Buddist/10%Christian, the rest their own religion

Economy driven by tourism, industrial and textiles and fishing

Our local guide was with a company named Viet Excursions.

Our motor coach navigated through the busy and cramped city streets. One thing that was obvious is the city, despite being a beach resort, overall was very dirty. There was a lot of poverty leaving the port and trash piled up along the roads.

Today’s weather is warm and humid. Our first stop was a small cultural center where we walked around viewing small gardens and then watched a cultural show. This culture show was much different than others we have seen. This show involved using Vietnamese instructs.

Some of the instruments included the following.

We walked the very steep steps to access the tower. It took a while, however well worth the physical energy to arrive at the tower. At the base of the tower, there were pillars lining a walkway to the steep stairs.

After reaching the top of the stairs, the Ponagar Chom Tower was so beautiful. Despite its age, it looked well preserved. The exterior of the tower was an orange type brick color. The structure actually looks like it was constructed of brick and clay.

While walking around the area, there were Vietnamese performers dancing for our viewing. There are photos in this blog showing the dancers. The performers not only danced, but they

danced with clay pots on their head. Very entertaining.

According to Lonely Planet here is a brief background of the Ponagar Chom Tower. “Built between the 7th and 12th centuries, these four Cham Towers are still actively used for worship by Cham, Chinese and Vietnamese Buddhists. Originally the complex had seven or eight towers, but only four towers remain, of which the 28m-high North Tower (Thap Chinh), which dates from AD 817, with its terraced pyramidal roof, vaulted interior masonry and vestibule, is the most magnificent.

It’s thought this site was first used for worship as early as the 2nd century AD. The original wooden structure was razed to the ground by attacking Javanese in AD 774, but was replaced by a stone-and-brick temple (the first of its kind) in 784.

The towers serve as the Holy See, honouring Yang Ino Po Nagar, the goddess of the Dua (Liu) clan, which ruled over the southern part of the Cham kingdom There are inscribed stone slabs scattered throughout the complex, most of which relate to history or religion and provide insight into the spiritual life and social structure of the Cham.

All of the temples face east,

as did the original entrance to the complex, which is to the right as you ascend the hillock. In centuries past, worshippers passed through the pillared meditation hall, 10 pillars of which can still be seen, before proceeding up the steep staircase to the towers.

In 918, King Indravarman III placed a gold mukha-linga (carved phallus with a human face painted on it) in the North Tower, but it was taken by Khmer raiders. This pattern of statues being destroyed or stolen and then replaced continued until 965, when King Jaya Indravarman IV replaced the gold mukha-linga with the stone figure, Uma (shakti, or female consort of Shiva), which remains to this day.

Above the entrance to the North Tower, two musicians, one of whose feet is on the head of the bull Nandin, flank a dancing four-armed Shiva. The sandstone doorposts are covered with inscriptions, as are parts of the walls of the vestibule. A gong and a drum stand under the pyramid-shaped ceiling of the antechamber. In the 28m-high pyramidal main chamber, there is a black-stone statue of the goddess Uma with 10 arms, two of which are hidden under her vest; she is seated and

leaning back against a monstrous beast.

The Central Tower (Thap Nam) was built partly of recycled bricks in the 12th century on the site of a structure dating from the 7th century. It is less finely constructed than the other towers and has little ornamentation; the pyramidal roof lacks terracing or pilasters, although the interior altars were once covered with silver. There is a linga inside the main chamber.

The South Tower (Mieu Dong Nam), at one time dedicated to Sandhaka (Shiva), still shelters a linga, while the richly ornamented Northwest Tower (Thap Tay Bac) was originally dedicated to Ganesh. To the rear of the complex is a less impressive museum with a few examples of Cham stonework.”

also saw a Vietnamese person floating in a saucer looking vessel paddling his way on the river. From a distance you can see the Ponagar Chom Tower where we just visited.

Once we finished crossing the bridge, we re-boarded our motor coach and drove to our next stop, Long Son Pagoda.

We parked our motor coach at a local gas station and then walked to the Pagoda. According to Princess Cruises and our tour guide, “the dragon-shaped balustrades lead the way into an imposing sanctuary decorated with murals and images of the Buddha. Behind the Pagoda sits an enormous white Buddha built in 1965.” The tour guide explained to us that the statute commemorates the monks who protested the abuses of the Diem regime by setting themselves on fire.

We spent about 40 minutes walking around the Pagoda area viewing the beautiful complex. Part of visit included viewing the leaning Buddha. Quite fascinating. Once we visited the leaning Buddha, we walked up additional steps to see the very large white colored Buddha. This was the monument for the monks that protested.

We really enjoyed our visit at the Pagoda, however we had another stop today. This

stop is a embroidery factory. We walked into a small shopping area were we stopped to listed to how embroidery was produced. Very interesting observing the process and the attention to the detail. The entire process is done by hand, labor intensive. Once we viewed all the beautiful work, small and large, we entered into an incredible showroom. I so wanted to purchase something, however it was expensive. Jenny and Erv ended up buying something.

We spent about 30 minutes at this stop and then we re-boarded the motor coach to drive to another stop, a culture show.

When we arrived at the cultural area, we were greeting by hosts serving coconuts for us to drink the juice. I am not much of a coconut person, but the juice was actually yummy. From the greeting area we went into a large performance hall and found a table to sit at. While sitting we were able to watch performers playing Vietnamese instruments and then a man and woman dancing.

From the cultural center we re-boarded the motor coach and then went to a local market call Cho Dam Market. We were allowed 30 minutes for shopping. Michael and

I went looking for an ATM to get local currency and then got coffee. Coffee is huge in Vietnam so we wanted to try some. When you are at an international destination, ask for hot coffee. We bought coffee, but since we did not specify what we wanted, we got iced coffee. Michael drank his iced coffee, I gave mine to the tour guide. I was not sure if the water/ice is safe.

We left the market and then headed back to the tendering areas to tender back to the ship. The wait was long, not if they did not plan accordingly for so many tours returning at the same time. If you enjoy travelling please follow us on Facebook & Twitter!   We encourage you to visit our sponsors (ads) on each page. 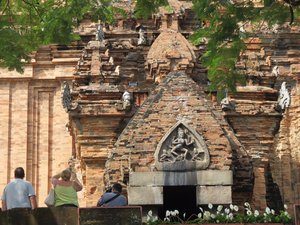 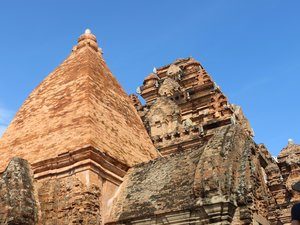 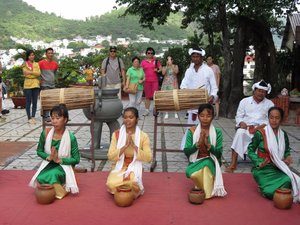 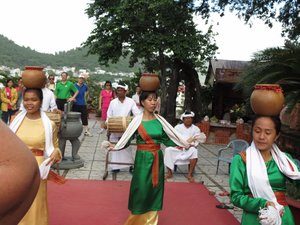 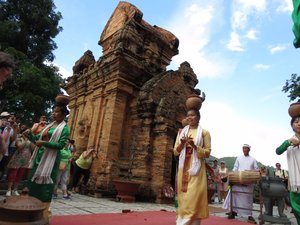 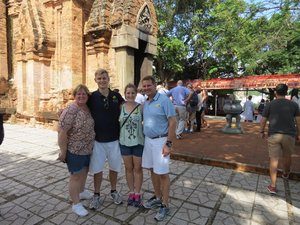 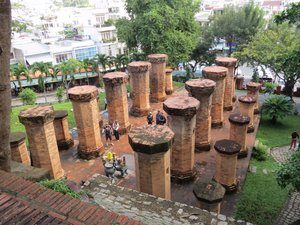 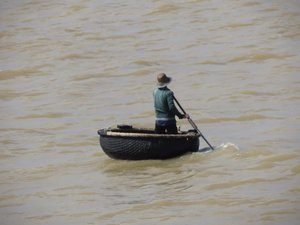 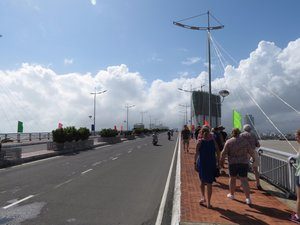 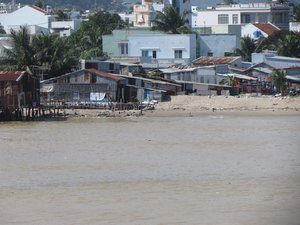 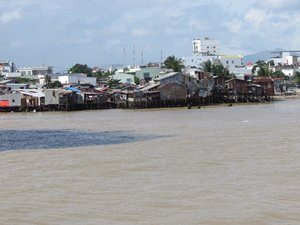 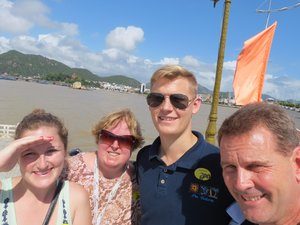 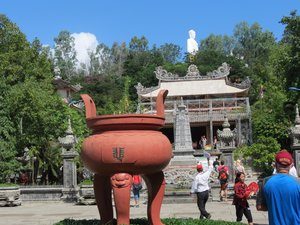 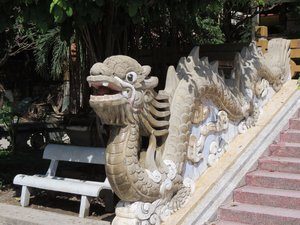 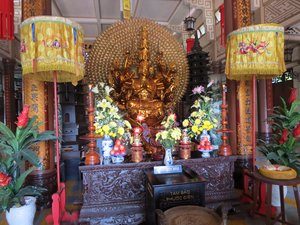 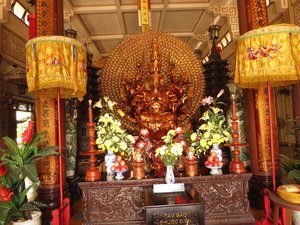 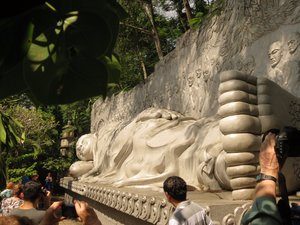 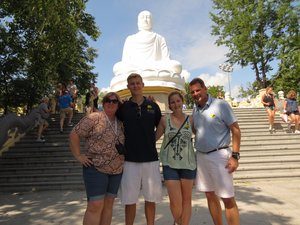 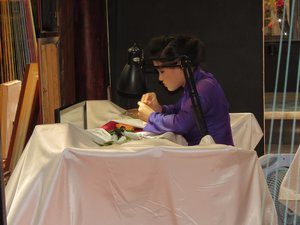 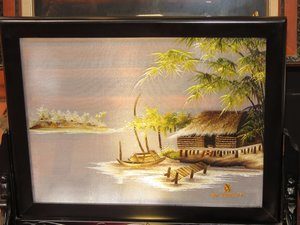 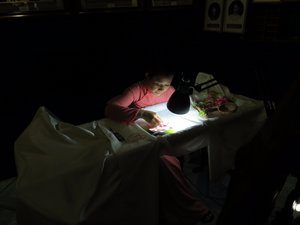 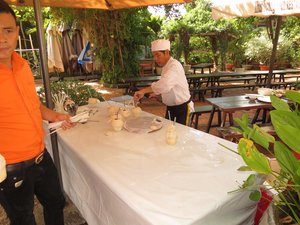 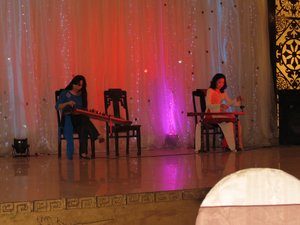 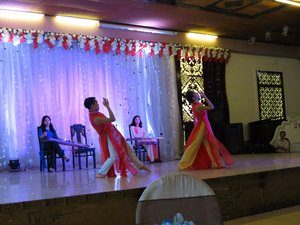 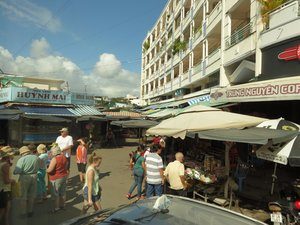