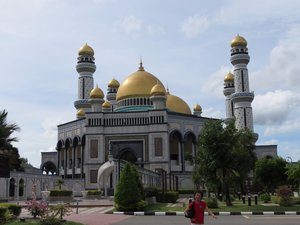 Today is our first port stop. No one in our family has ever visited Brunei. There is no expectation of this country other than it will be warm and humid.

Todd was up at 4:30 am, surprise. But I have a good excuse; I did not sleep well last night. But getting up early has its advantages too. Since I am teaching a class I needed to grade papers and post grades. This is what I did for 3.5 hours.

Our family signed up for three different tours, however it seems like we all visited similar locations, the itinerary slightly modified. I believe the only difference is that Jenny and I had lunch included and we spent more time cruising on the river. This blog will reflect what Jenny and I did, however a mix of others thoughts

on their similar tours.

The Maura, Brunei port was super simple and not as industrial as other Asia ports we have visited. Following breakfast we meet our tour in the Princess Theater for our meeting time of 10:45 am. Jenny and I wanted to arrive early so we can get on the tour early. Once our color/number group was called, we exited the ship and boarded our air conditioned motor coach. Our bus was about 75%!full, lots of Australians. We love Australians, super fun and nice.

Our tour started and the motor coach navigated through the countryside. We learned the following about Brunei.

No alcohol sold in the country

No smoking allowed (however we did see a few smokers)

Muslim men can have up to 6 wives, as long as he can support them. The children and wife need to be educated

Literacy rate is 98%
There were 34 water villages, however 16

The first part of the tour drive took about 30 minutes. We passed several villages and mosques. It was very interesting seeing all the writing in Arabic. We have not seen this seen visiting Egypt, however the first time in an Asian country. Our first stop was a market. The tour guide told us that it is considered a wet market. I thought the footing of the outdoor markets would muddy, however the ground was concrete but very wet and cramped. The market was located next to a small river. In order for us to access the market, we needed to cross a foot bridge. In this market they sold merchandise, lots of food items. The entire area was run down, however it has been around for years and this is their culture. As Jenny and I expected, the air was smelly. What we found interesting here is that even though our perception here was this market was run down and smelly, this culturally rich in a way that the locals use this market for socializing, doing business, or family time. It was a great culture experience. I included a few photos of this

We re-boarded our motor coach and then drove for about 15 minutes and made a stop at a beautiful mosque. The mosque, named Omar All Saifuddien, was quite beautiful from the exterior. Our timing was perfect, it was prayer time. The Muslim prayer was broadcast through a speaker system so you could hear it from a distance. According to our tour guide, the Muslim pray 5 times a day. We were able to exit the bus and walk the perimeter to take photos. We did notice that next to the mosque, to the left from our point of view, there was a small ship, I will describe this later. There was a walkway from the mosque to the ship, however we were not able to explore this. Jenny and I were disappointed that we could not tour the mosque; we were dressed for a mosque visit. Cindy and Michael visited this mosque. In their tour, they were able to tour the inside, however could not take photos. Michael was able to sign the registry. Since he was wearing shorts, he had to wear a trench coat of cover his skin. According to Lonely Planet, here is

a great summary of this mosque. “Completed in 1958, Masjid Omar Ali Saifuddien – named after the 28th Sultan of Brunei (the late father of the current sultan) – is surrounded by an artificial lagoon that serves as a reflecting pool. This being Brunei, the interior is pretty lavish. The floor and walls are made from the finest Italian marble, the chandeliers were crafted in England and the luxurious carpets were flown in from Saudi Arabia. A 3.5-million-piece glass mosaic overlaying real gold leaf covers the main dome. The mosque’s 52m minaret makes it the tallest building in central BSB, and woe betide anyone who tries to outdo it – apparently the nearby Islamic Bank of Brunei building originally exceeded this height and so had the top story removed by order of the sultan. The ceremonial stone boat sitting in the lagoon is a replica of a 16th-century mahligai (royal barge) where Koran-reading competitions were once held.”

After our quick walking tour of the exterior of the mosque, we quickly boarded the motor coach and went to a local five star hotel. The hotel was named the Mall Hotel. This was creative. The hotel was truly beautiful and perfectly

situated in the center of town, attached to a nice mall area. At this hotel, we had a buffet lunch arranged for us. Overall, the food options were great and even had a western flavor, mac and cheese. This was quite funny. During lunch, Jenny and I sat with a young lady from China. She was also a school teacher.

Following our great lunch, we walked around the hotel to take a few photos, use the water closet, and then walk into the mall. The mall was so clean and very busy. It had multiple floors, all stuffed full of business owners. Jenny and I did not purchase anything, however it was fun walking around the mall for a short time.

We re-boarded our motor coach and headed to another mosque. This mosque, Jame’Asar Hassanal Bolkiah, was much larger than the first mosque we visited. The golden tops were absolutely beautiful and the entire structure allowed for some beautiful photos. Here is a brief summary of this mosque provided by Lonely Planet. “Built in 1992 to celebrate the 25th year of the current sultan’s reign, Brunei’s largest mosque and its four terrazzo-tiled minarets dominate

their surroundings. It’s impossible to miss as you head towards Gadong, about 3km from the city centre. The number 1 bus goes here. It’s certainly an impressive building; because the sultan is his dynasty’s 29th ruler, the complex is adorned with 29 golden domes. At night the mosque is lit up like a gold flame.”

Following a quick photo stop of this large mosque, we then headed to the Royal Regalia Museum. According to Lonely Planet, they describe the museum as follows “When called upon to present a gift to the sultan of Brunei, you must inevitably confront the question: what do you give a man who has everything? At this entertaining museum you’ll see how heads of state have solved this conundrum (hint: you’ll never go wrong with gold and jewels). Family photos and explanatory texts offer a good overview of the life of the sultan, who is himself depicted in myriad forms (including a hologram) in a series of portraits.

used for the 1968 coronation.” We spent about 45 minutes, however we were not allowed to take pictures inside the museum, rather just the entry area.

We left the museum area in our motor coach and headed to our next stop, the Kampong Ayer. Here at the river we boarded a motor boat. On the motor boat, we were able to see colorful villages built on stilts along the river. They were very interesting to see another way of living, on a river. After passing the villages, we went into the tropical rain forest area in search for monkeys. The motor boat ventured into this small mangrove area, there were trees, underbrush everywhere. It was quite surreal and exciting. This really makes me want to go to the Amazon now. The tour guide was able to see a monkey; however it was too far away from us. You could see it in the distance but not able to take photos. After spending about 15 minutes here, the motor boat started our trip back to the motor coach. Before arriving at the motor coach, we stopped at one of the villages and walked on the connecting boardwalks and entered a

family’s home. Here we were served beverages and snacks. This was such a great time and an excellent way to see how the locals live on the water.

Lonely Planet prepared a nice summary of the water villages. “Home to around 30,000 people, Kampong Ayer consists of 42 contiguous stilt villages built along the banks of the Sungai Brunei. A century ago, half of Brunei’s population lived here, and even today many Bruneians still prefer the lifestyle of the water village to residency on dry land. The village has its own schools, mosques, police stations and fire brigade. To get across the river, just stand somewhere a water taxi can dock and flag one down (the fare is B$1).

Founded at least 1000 years ago, the village is considered the largest stilt settlement in the world. When Venetian scholar Antonio Pigafetta visited Kampong Ayer in 1521, he dubbed it the ‘Venice of the East’, which is, as descriptions go, a bit ambitious. The timber houses, painted sun-bleached shades of green, blue, pink and yellow, have not been done-up for tourists, so while it’s far from squalid, be prepared for rubbish that, at low tide, carpets the intertidal mud

Mall outside where we ate lunch

under the banisterless boardwalks, some with missing planks.

In some places smart new houses have been constructed – these sturdy buildings looks better equipped to survive the monsoon storms that have been known to cause flimsier wooden structures in the village to collapse.

If you look to the main roads on the banks opposite the village, you’ll see luxury cars lined up on the shoulder of the road; many of these cars belong to water-village residents. That said, Kampong Ayer is also home to a sizable population of the undocumented immigrants who constitute Brunei’s underclass.

The villages on the river’s north bank (the same side as the city centre) used to cover a much larger area, but many have been razed as part of plans to spruce up the waterfront area around the Omar Ali Saifuddien Mosque. To get to these villages, follow the plank walks that lead west (parallel to the river) from the Yayasan Complex, itself built on the site of a one-time water village.”

After visiting the private home in the water villages, we exited the area to dry land and walked past a cemetery where the locals are buried. The cemetery is

built on the side of a hill. We continued our walk until we met our motor coach and then headed back to the ship. 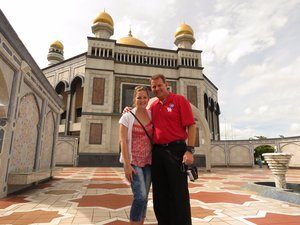 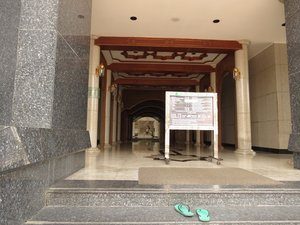 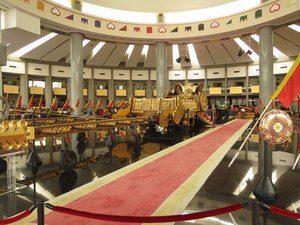 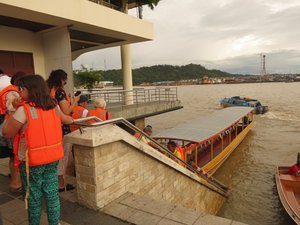 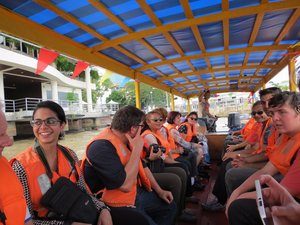 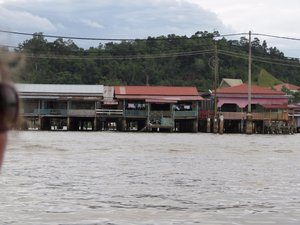 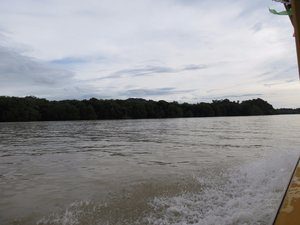 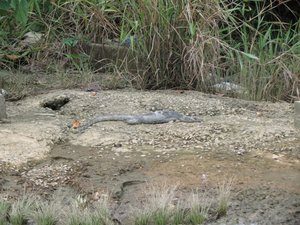 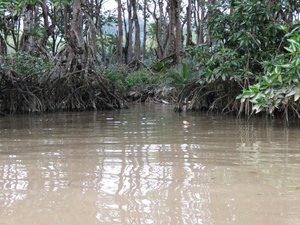 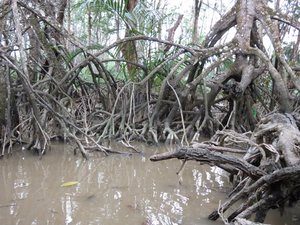 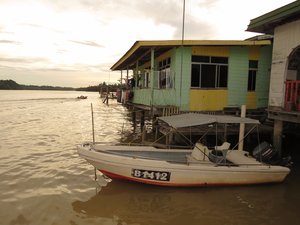 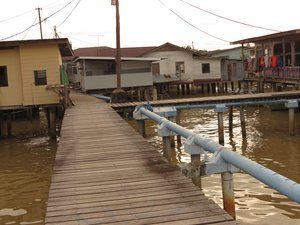 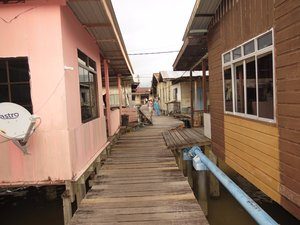 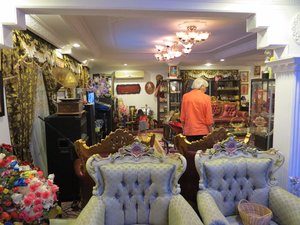 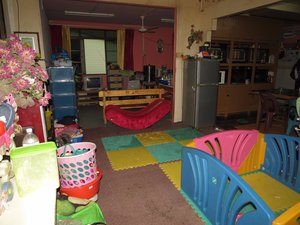 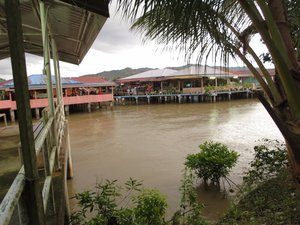