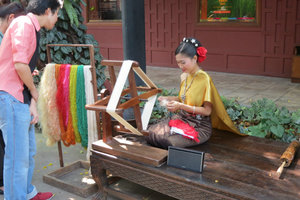 Considering the late evening arrival the prior evening and excitement over our suite, still managed to wake up at 630am. We still can’t believe we have the “celebrity” room. By 730am we were in the Executive Lounge for breakfast eating breakfast and talking about what we were thinking about doing for the day. Breakfast was quite good for an Executive Lounge. Most of us tried the local cuisine (eggs, bacon, rolls) however some of us ate fried flat noodles with pork, fried rice with eggs, dim sun (petite pasta shell with stuffed pork), Chinese bun with red pork (the bun looks like an egg). The service here at the Conrad Bangkok Hilton was fantastic.

Our family in front of one of many buildings

When the day was done, we actually visited the following areas, partly due to the high heat and humid. We visited Jim Thompson’s House and Museum, Wat Traimit, Chinatown, and MDK shopping mall.

To someone reading this blog, I am sure you wonder why we are visiting a location that sounds like an American name, however we are in Thailand. Good thought, however Jim Thompson, yes an American, had a significant impact in regenerating a business unique to Asia and Thailand’s economy. A little about Jim Thompson. “Jim Thompson was born in Greenville, Delaware in 1906. He attended public schools in Wilmington, went on to boarding school at St. Paul’s and attended Princeton University, the family university, from 1924 to 1928. Although Thompson had a keen interest in art, he chose to become an architect and went on to study architecture at the University of Pennsylvania. He was a

practicing architect in New York City until 1940.” (Jim Thompson’s website) He served in WWII and was stationed in Southeast Asia. For sake of time/reading, Jim Thompson revived the silk industry in Thailand. He brought the teek houses the location we visited. The houses were located on a small waterway making it easy for supplies/shipments to be moved around. The location of the houses/museum were surrounding by the modern time versus a lost generation. Although this location is in the middle of the city, the area is quite quiet and very relaxing feeling. It is beautifully landscaped and maintained and they have tried to maintain the original feel, however somewhat commercialized, however in a good way. Here is a link to the place we visited if you are interested in learning more about him, http://www.jimthompsonhouse.com/.

While waiting for our tour, we took a few family photos and then photos of some of the architecture; I attached a few photos for your viewing. The tour started at 11:00am and Ann took us around the beautiful area. We first stopped to visit Oscar the fish that apparently bites when you stick your finger in the water. I attached a photo of

Silk worms being steams before the silk threads are pulled.

Oscar. Then we walked quickly through the gardens then toured the house. We had to remove our shoes when walked through the house. Being as hot as it was, a cool floor felt pretty good. We were not allowed to take photos in the house, however the rebel I was, I snapped a few photos, one of them are attached to the blog, shame on me. During the tour I learned pretty neat stuff. I took a few photos a small house locating outside, next to the water canal. This small house was called a spirit house. “The spirit house is intended to provide a shelter for spirits which could cause problems for the people if not appeased. The shrines often include images of people and animals. Votive offerings are left at the house to propitiate the spirits. More elaborate installations include an altar for this purpose.” (Internet research documentation).

Another thing I learned was the way to determine Chinese artwork on at least porcelain is flower artwork was Thailand and art work with animals is Chinese. If there is artwork with half human and half animal, this is from Thailand. After our tour, we walked more around the

grounds some more and watched a lady making silk scarves’ and then a gentleman pulling the silk strands from silk worms. I attached some photos for both. Here is a link on how silk is made, http://www.designboom.com/history/silk1.html.

Before leaving Jim Thompson’s, we ate lunch at the onsite restaurant. Cindy and Jenny had a panini, Michael had a cashew chicken with rice and I had noodles with chicken. It was good sitting a restaurant where we could relax in the air condition.

We took a taxi from Jim Thompson’s to Wat Traimit, which is where the Golden Buddha is located. We arrived, all I can say is WOW. The Wat (temple) is absolutely beautiful and breathtaking, great on your visual senses. We purchased our tickets and walked up the stairs to the second and third floors where we toured an exhibit. As a brief history of the Golden Buddha, the history is quite interesting. Apparently the Buddha was found in the river and it was originally surrounding by plaster. According the brochure, the plaster was put on the Buddha because it was protecting it from the enemy invading Thailand. When the Buddha was discovered when they

were trying to lift it with ropes, it slipped and hit the ground breaking the plaster, revealing the golden Buddha. On the fourth floor is where the Buddha is located. The Buddha is relatively small compared to some of the other Buddha we have visited in Asia, however this one is remarkably different because it is made in gold. I attached photos of the Buddha and some of the interior of the building. When it is all said and down, this place is beautiful. Here is some information on the Golden Buddha and how it ended up at its location.

There was a lot of talk about Chinatown, however after walking around in the blistering heat and humid, we stumbled on Chinatown and it was not really a big deal. We took a few photos and then caught a taxi to the MDK mall.

At the recommendation of our friend in the states and a lady at the Jim Thompson’s restaurant, we were convinced not to go to the weekend market and instead we decided visit the very very large MDK shopping mall. Although the local culture experience of the

weekend market would have been fun, the heat/humid was a little too much for all of us so we decided to visit the mall. We have no regrets. This place was awesome. There were at least 5+ floors of shopping that went on and on and on. We shopped on the fifth floor; this is where all the tourist shops were. We did all our shopping here. Really got some great deals. I have never seen some many shops, in my opinion more than the Grand Bazaar in Istanbul, Turkey. Once we were done with shopping, we went to the ground level and waiting a taxi queue for about 20 minutes. The queue had about 40+ people waiting.

We returned to the hotel to freshen up and then went to the concierge lounge for a little rest and relaxation and adult beverages. They also had a few great appetizers. We spent about one hour here. We asked the concierge in the executive lounge if they would recommend an Italian restaurant. I read somewhere that Italian food is a big deal in Thailand. They made a reservation for us at 830pm.

The outside attendant called for a taxi; however

we had to wait about 15 minutes before a taxi arrived. The driver took us to our restaurant, but along the way he passed the restaurant and had to turn around. When exiting the taxi, he tried to charge us 100 Bhat, however the trip should have cost 50 Bhat or less. I told him he was getting 50 BHAT, the end.

Our dinner this evening was wonderful, however we were all tired. The atmosphere was local and charming, it was not a tourist trap. Jenny and I had the lasagna, Cindy had spaghetti Bolognese, and Michael had a seafood dish. We really enjoyed our food. After the meal we had no room for dessert, however the staff brought us several puff pastries with powdered sugar, this was too much, but still great.

Cindy and I in front of the Golden Buddha

The Breton Family inside the Wat Traimit

Tourist shopping area in the mall

The Breton Family winding down the evening with dinner