Our tour started outside the pier area and then we walked through a terminal building and then to our air conditioned bus. Once we boarded, we immediately left the pier area heading to our first stop, Ayo Rock Formations. Prior to arriving at the Ayo Rock Formations, the tour guide explained a version of this (source: internet searches) about Aruba. Aruba (/əˈruːbə/ ə-roo-bə; Dutch pronunciation: ) is an island 33 kilometres long (20 mi); it is located about 1,600 kilometres (990 mi) west of the Lesser Antilles in the southern Caribbean Sea and 27 kilometres (17 mi) north of the coast of Venezuela. Together with Bonaire and Curaçao, it forms a group referred to as the ABC islands. Collectively, Aruba and the other Dutch islands in the Caribbean are often called the Netherlands Antilles or the Dutch Caribbean.

Aruba is one of the four constituent countries that form the Kingdom of the Netherlands, along with the Netherlands, Curaçao and Saint Maarten. The citizens of these countries all share a single nationality: Dutch. Aruba has no administrative subdivisions, but, for census purposes, is divided into eight regions. Its capital is Oranjestad.

Unlike much of the Caribbean region, Aruba has a dry climate and an arid, cactus-strewn landscape. This climate has helped tourism as visitors to the island can reliably expect warm, sunny weather. It has a land area of 179 km2 (69.1 sq mi) and is densely populated, with a total of 102,484 inhabitants at the 2010 Census. It lies outside the hurricane belt.

Aruba is a generally flat, riverless island in the Leeward Antilles island arc of the Lesser Antilles in the southern part of the Caribbean. It has white sandy beaches on the western and southern coasts of the island, relatively sheltered from fierce ocean currents. This is where most tourist development has occurred. The northern and eastern coasts, lacking this protection, are considerably more battered by the sea and have been left largely untouched by humans.

During our drive, we noticed how dry and a desert like it is. There were several beautiful homes along the way; however it was amazing that this island in the Caribbean can be so dry. They get a lot of their water supply through a distillery.

As explained above, Aruba is general flat, so seeing a hilly area was interesting. We stopped to do a self-paced walking tour of the Ayo Rock Formations. This formation is in the middle of a residential neighborhood. It was quite interesting and beautiful. Here is some information on the Ayo Rock Formation area according to web searches. Ayo Rock Formations are monolithic rock boulders located on the island of Aruba in the Caribbean. They are located near Ayo village, about 3.2 km from the natural bridge towards Casibari. Casibari Boulders are

Ayo Rock Formations – Panoramic view from on top of the rocks

about 3.2 km inland between Natural Bridge (now defunct) and Oranjestad, the capital of Aruba, west of Boac Andicuri.

The Arawak people were the earliest settlers on the island. They used to visit Ayo Rock Formations so that they could hear incoming thunderstorms closing in on the island of Aruba. They also carved paintings in rocks called petroglyphs while performing religious rites.

One of the unusual and notable rock formations is the Casibari Boulders, which are tonalite rocks seen to the north of Hooiberg. They are reddish brown in colour and rise above the desert landscape giving a panoramic view of the island. They are located amidst cacti, and lizards are commonly encountered here. The boulders have unusual shapes resembling birds and dragons. There is no plausible explanation yet for the presence of these unusual wind-carved boulder formations on a flat sandy island. However, the geological formations seen on the island are of volcanic origin in its eastern sector, and some areas which are of coral formation are ascribed to the sea which was at higher level. However, in the diorite rock formation region, the Ayo Rock Formations are seen in a heap of monolithic boulders.

After taking photos and spending 20 minutes here, we boarded the bus and headed to our next stop, the natural bridge on the north side of the island. This part of the island is covered with remains of volcanic rock and sand. There is absolutely no vegetation on this part of the island. The first thing we observed before exiting the bus was the extremely rough water. The tour guide said today was a mild day, normally the surf is 15 – 20 ft. It was about 10 foot today. Up until 2005, there was a very large natural bridge, however in 2005, this large natural bridge collapsed. On the positive side, there is a baby or small natural bridge that has formed. We spent about 30 minutes at this location taking photos and videos. It was absolutely fascinating to observe such a beautiful natural wonder. It is one of those places where you can stare at all day to just observe everything that is going on around you. I posted several photos of this location in our blog.

Once leaving the natural bridge area, we drove to the only lighthouse in Aruba, the California Lighthouse. For me, this was awesome. I love lighthouses, so is really interesting to get out and take photos. The California Lighthouse is a lighthouse located near Arashi Beach on the northwest tip of Aruba. This lighthouse was named for the steamship California, which wrecked nearby on September 23, 1891. It was formerly open to the public until a suicide occurred, which prompted authorities to restrict public access to the lighthouse.

Following our 10 minute stop at the lighthouse, we headed to the beach area which was part of our tour. Before arriving, we passed by the golf course, beautiful homes, and the high and low rise hotels. The tour guide said the hotels are separated out to high and low rises. I don’t recall the height size to categorize what hotel is a high and low rise. Our bus ended up stopping at the Palm Beach area of Aruba, not too far from our ship. We had exactly one hour to enjoy the beach. 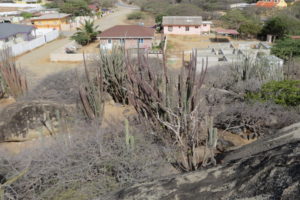 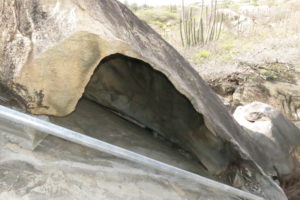 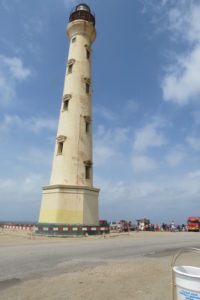 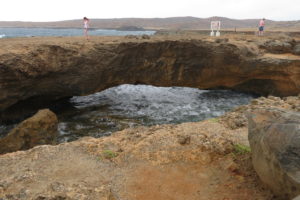 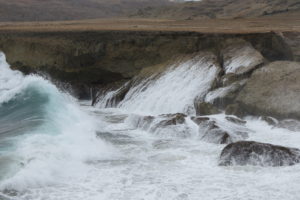 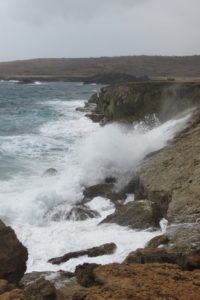 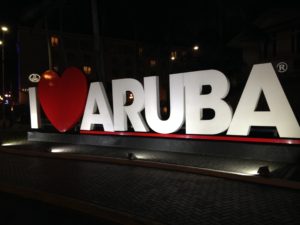